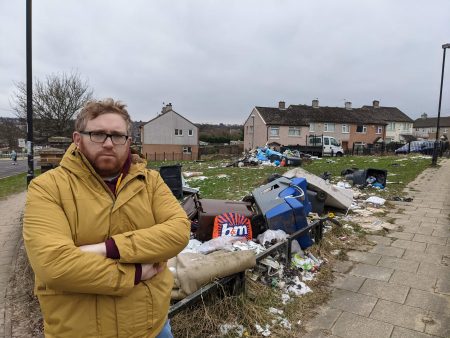 Earlier this month, the Labour run Executive approved spending £300,000 to boost the District's efforts to stop fly tipping but Bradford Green Party councillors have called for this to be increased to £1 million in their proposals for the Council budget.

Councillor Martin Love, the leader of the Green Group has said,

“We really need to really invest in delivering improvements to the everyday quality of life for our residents. In some parts of our district, the problem of fly-tipping is out of control.

“Fly-tipping costs the council a lot of money and £300,000 isn’t anywhere near enough investment to tackle the issue. We want the Council to invest much more into the budget to tackling fly-tipping and street cleansing in general.”

A freedom of information request by Bradford Green Party earlier this year identified Little Horton, Bowling and Barkerend and the Tong Ward as the worst areas for fly-tipping.

Matt Edwards, a community campaigner for Tong Ward who has been pressing for action on this issue for years added,

“People across our district want radical action to improve their neighbourhoods. Fly-tipping is out of control in parts of our city and the Council has continued to fail residents whose lives are being made miserable by this problem.

“Last year Bradford Council promised to buy more cameras but since then the situation has only gotten worse. Bradford needs to look at what other authorities are doing and see if any of these schemes can be introduced here.

“For example, Wolverhampton Council launched a ‘Shop a tipper’ campaign to encourage residents who spot fly-tippers to report the offender to the council for a £100 reward following the payment of a Fixed Penalty Notice or a successful prosecution, and Bradford could do the same.”