Bradford’s Green councillors have condemned the lack of action by Bradford Council six months after the authority became one of the first in the country to “declare a climate emergency.” 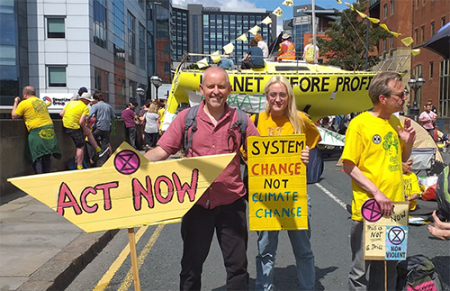 At last night’s July Council meeting, the Labour and Conservative groups rejected a set of far-reaching Green proposals for low carbon, sustainable travel, opting instead for a package of measures described by the Greens as “totally inadequate”.

This comes as protestors from the group Extinction Rebellion escalated their campaign for action to tackle climate change by closing Victoria Bridge in Leeds as part of a coordinated week-long demonstration in cities across the country.

The leader of the Green Party on Bradford Council Cllr Martin Love (Shipley) said:“We have seen that public opinion is rapidly shifting towards urgent action to tackle climate change but last night the ruling Labour Group here in Bradford refused to accept the need for radical climate action in our district. It is deeply disappointing.

“The idea that installing just 20 EV charging points across the District over the next nine months is a sufficient response to global warming is barely credible. The Council declared a climate emergency six months ago, yet nothing has changed as a result and time is running out.”

Cllr Kevin Warnes echoed these concerns adding: “The Labour leadership seem to think that responding to the climate crisis is a matter for the Leeds City Region, when in fact we need radical action here in Bradford as well. Change has to happen in our District as well as across the wider region.

“We need much stronger leadership, especially bearing in mind that Cllr Susan Hinchcliffe chairs the West Yorkshire Combined Authority and is therefore in a unique position to press for a rapid transition to a low carbon economy. I simply don’t understand the ‘Business As Usual’ mindset that characterises decision-making on carbon pollution in Bradford and the wider region.”

Cllr Warnes also urged colleagues on the Council’s Regeneration and Environment Overview and Scrutiny Committee to be as ambitious as possible when they meet next Wednesday to look at Bradford’s action planning on climate change. He says,

“Other Councils are forging ahead on low carbon transport, green housing and renewable energy projects, and there is no reason why Bradford Council cannot do the same.”