Following enquiries from residents, Matt Edwards has spoken to Bradford Council to identify what the plans are for New Lane between Tong Village and Holmewood. 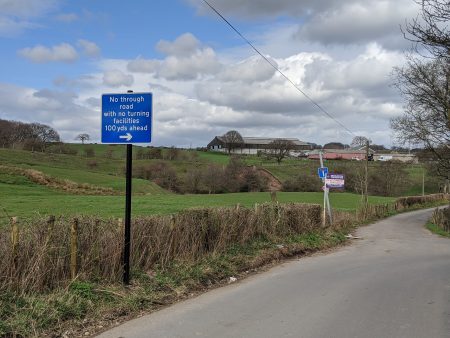 Some residents have contacted Matt following the installation of new “No Through Road” signs at the junction of Tong Lane and New Lane and near the mini roundabout on Landscove Avenue.

Matt has been able to confirm with the Highways department that access to Tong Village from Holmewood will no longer be possible because a barrier will be installed at the end of New Lane.

The Legal Order associated with this became operational on the 30th March.

Bradford Council put up the signs early to give road users enough notice before the road is blocked off which will happen imminently (an exact date may not be possible with all the Coronavirus disruption).

The initial plan is to install temporary barriers before the permanent closure happens sometime in the early summer.

Both the temporary barriers and the permanent barriers will still allow the farmers to be able to move equipment and livestock. There will also be easy access for horse riders, pedestrians and cyclists.

Our Tong Ward community campaigner Matt Edwards has said “Unfortunately, New Lane has attracted a lot of anti-social behaviour and very dangerous driving over the years and Bradford Council has done this because the safety of those living nearby has to come first.

“Both New Lane and Raikes Lane are also targets for fly tipping and I hope by closing the road off it will help reduce it happening along both roads. But Bradford Council will need to monitor the situation.

"I am however a bit disappointed with the lack of wider community consultation."

In November 2018, a large amount of waste was dumped in the middle of the road causing the road to be closed off.

Matt added, “I know this will cause inconvenience for the people who have used the road safely over the years.

"This will also likely increase the traffic using the traffic lights at the junction of Holme Lane and Tong Street especially at rush hour and I will be keeping in touch with the Highways Department to ensure changes to the lights are made if necessary.”

Featured in the Telegraph and Argus