A Green Party campaigner has called on contractors carrying out roadworks in Bradford to ensure cycle lanes are not blocked by road work signs. 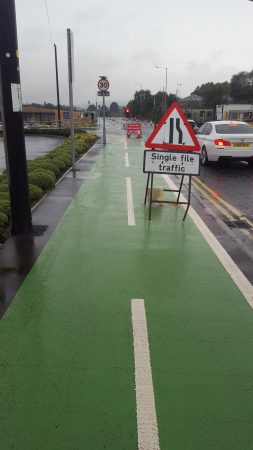 The cycle lane on Stanley Road forms part of The Canal Road Greenway – a multi-million pound scheme that provides an uninterrupted segregated cycle lane between Shipley and Bradford City Centre.

“This is symptomatic of our car centric approach to getting around. Bradford Council have spent a lot of money on these new routes and cyclists have just as much right to be there as cars do.

“Putting signs on segregated bike lanes is dangerous and this is not an isolated incident. But fair play to Northern Gas Networks, once I contacted them about the problem, they moved them very quickly.”

Northern Gas Network advised Mr Parkinson within half an hour that the road signs had been removed.

“We are trying to encourage people to get around without their cars and safety for cyclists and pedestrians has to be our top priority.

“I will ask Bradford Council to ensure that contractors are aware that cycle lanes should not be obstructed by road signs.”