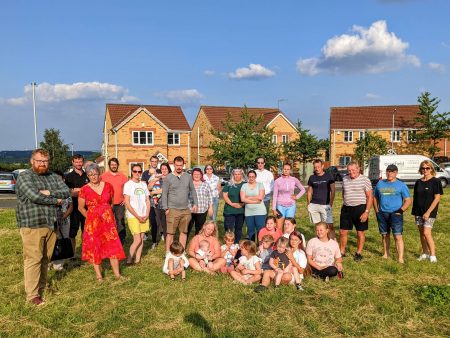 Residents on an a housing development in south Bradford have expressed frustration after their local green space was found listed on a property auction website.

Residents living on Holme Beck Park on the edge of Holmewood were alarmed to find that the green space, which had been set aside as public open space on the development, was found on an auction site based in Glasgow.

The land is now owned by Greenbelt Energy Limited, a company based in Scotland.

Shaun, who lives on the development with his young family said, “This is a much loved community green space that is enjoyed by the many of the people living here.
“Children play here, people walk their dogs and we are even talking about holding community events.”

“As a community it is often tidied and we are all worried that this will become another piece of land becoming neglected and forgotten, which is sadly all too common for this area.
Some residents were calling on Bradford Council to step in and acquire the land to prevent it being acquired by an unreputable owner who prevents local families from continuing to use the park.

Dave¸ who has lived on the development for many years said, "We are really concerned about this. There's a lot of kids on here and they need a place to play locally.

"We really aren't asking a lot, but we want the council to step in and help us. What the current owner is asking for the land isn’t a lot for an organisation like Bradford Council but it will mean our community can continue to enjoy this park.”

Ward Councillor Matt Edwards¸ who met with residents yesterday has said, “Clearly something has gone wrong with the planning process here.

“In the approval for the development back in 2005, it was very clear that this land should be maintained as public open space for people living here to use. It was even a selling point for many people when they bought their houses.

“If the last 18 months has taught us anything, it’s that we need to appreciate the green spaces we have on our doorsteps and that’s exactly what people living here have been doing.

“I am so frustrated for them and have been in touch with the current land owner to see if we can come up with a solution that works for the community.”