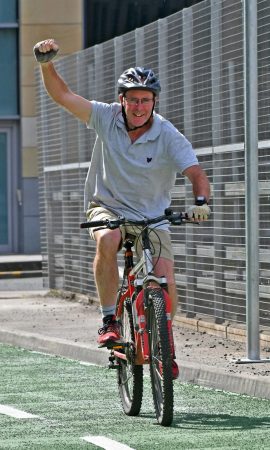 Bradford Green Party Councillors and Campaigners are calling on Bradford Council to move much quicker to put in place schemes using the ‘Emergency Active Travel Fund’ from the Government to encourage cycling across the district.

Green Party campaigner Anna Watson says "Councils around the country have been using their funding to put in place 'pop-up' cycle lanes, yet here in Bradford we are still waiting for details of ow the council will spend their money.

"We have been told that there will be new protected cycle routes across Bradford, but we have no idea where or when.

"These schemes need to be put in place as a matter of urgency. They are crucial to help people travel to work safely during the pandemic and there is no reason why Bradford residents should be waiting so long."

Shipley Green Party Councillor Martin Love says "Once again Bradford Council is following instead of leading. Nothing that has been announced recently is new. The proposals for Hall Ings in the City Centre for example, are just a re-announcement of plans that were already in the pipeline.

“It would be a huge embarrassment for the City if there weren't more cycle lanes in place across Bradford at a time when cycling is being actively encouraged by the Government.

“It is National Cycle to Work Day on 6th August and it will be a travesty if Bradford Council don't have their schemes up and running by then.